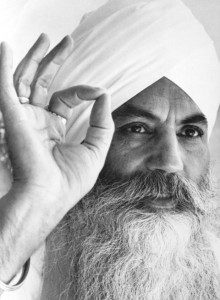 The classes are suspended, we are looking for a qualified teacher.
Kundalini Yoga is an ancient science linked to the Tantric tradition of the North of India. Considered as one of the “original yoga” in that it brings together in the body of its techniques many forms of yoga. It is also a yoga of sound, conveying through the mantras the creative energy of Shakti (creation) . It was introduced to the Western world by a teacher of Indian origin, Harbha Jan Singh Khalsa Yogiji, known as Yogi Bhajan. His teachings have been spread throughout the world by professors recognized by the international associations IKYTA and 3HO Happy, Holy, Healthy) and the KRI Research Institute in Kundalini. Kundalini Yoga takes its name from the Sanskrit term kundalini, which denotes a primordial energy that is present in every human being and which evolves along a main channel (sushumna) located in the spine. It is often depicted as a coiled serpent at the bottom of the spinal column at the sacrum; When activated correctly, this energy rises to the top of the skull moving along the 7 main chakras. Kundalini yoga helps to awaken the vital energy and harmonization of all energy centers.
Kundalini yoga is practiced in the form of Kriyas (here in the sense of cleansing, purifying), powerful exercises. They aim at exhausting the old repetitive and sterile patterns (karma) to give way to new structures through which the profound being will evolve.
Like any self-respecting yoga:
Exercises strengthen the nervous system, stimulate the endocrine system, improve blood circulation, increase respiratory capacity, tone the digestive tract and stabilize the mind and at a more advanced level it allows to develop its own spirituality, enlarge the consciousness Of Self and of the world and to develop his inner wisdom through a growing sense of balance and fullness.