Sattva Yoga Chamonix’s classes are given in french and/or in english according to the students needs. 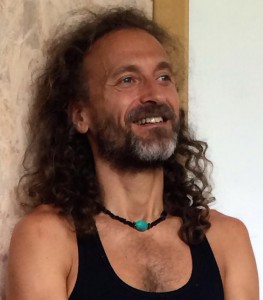 To learn Yoga and Ayurveda Hamsa traveled to India, Europe and America.
At a young age he was interested in Bagwan Shree Rajnesh Dynamic Meditation, and also Zen meditation. He was also practicing Do-in, Japanese postures and self-massage.
His first Ashtanga Vinyasa Yoga teacher was Gustav Björkman, whom he met in Chamonix. Then he studied with Mark Darby for more than 12 years, as well as numerous courses with Matthew Sweeney, and Sheshadri (Mysore India). During thoses years he studied Ayurveda and massage.

After deepening his practice of Ashtanga Yoga, he became interested in Yin Yoga and Dharma Mittra Hatha Raja Vinyasa Yoga. Then he was initiated in Kriya Yoga of Babaji by Marshall Govindan who gave him his spiritual name, Hamsa. Since 2015 he follows the teachings of Shailendra Sharma Kriya Yoga guru.

His vision allows him a comprehensive understanding in accordance with the fundamental principles of Yoga and Ayurveda. Simultaneous vision of the one and the many, it is in this unity that the spirit leaves the dichotomy pleasure/pain to enter inner peace. The yoga is the method to achieve the state of Yoga, the ultimate freedom in unity.
It is with passion and enthusiasm that he shares his knowledge and accompanies his students, with a mix of humor and discipline, on the path to Self-realization.

During his teenage years Nicolas started to get interested in meditation, yoga and different subjects on eastern philosophies. In 2011 he learns some yoga excersices from a friend of his, and later on discovers the five tibetan rites from a book, and starts to practice and incorporate these into his daily life, making it his first introduction to yoga. In 2013 he goes to India for the first time, attending a 200 hour Hatha Yoga Teacher Training in an ashram, living simply and learning more deeply about yogic life and philosophie.The following year he returns to India, traveling around the Himalayas and practicing asanas and pranayama and attending his first 10-day Vipassana meditation retreat.
This year he also meets his teacher Hubert de Tourris and starts practicing in the Sattva Yoga Shala in Chamonix. In 2016 he is introduced to the Ashtanga Vinyasa system and starts to practice it regularly. The following years he attends workshops with Shankara Darby and two Teacher Tranings with Mark Darby in Chamonix and later with Sheshadri in Mysore. Taking the opportunity while being in India, he also does a second Vipassana meditation reatreat.
End of 2017 he meets the great Guru of Kriya Yoga, Shailendra Sharma, and gets initiated into the practice. Ashtanga Vinyasa Yoga Teacher Training with Joanne and Mark Darby. In September 7, 2016, she is introduced to Babaji’s KriyaYoga by Guruji Shailendra Sharma in Govardhan, India. A year later, in November 2017, she will take an Ashtanga Vinyasa Yoga course with Sheshadri and Harish in Mysore, India, where she will go deeper in the asana and pranayama practice.