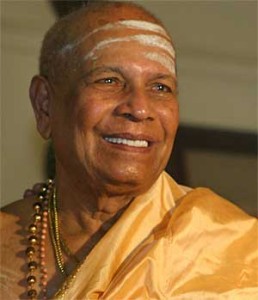 Ashtanga Vinyasa Yoga is an ancient system of Yoga that was taught by Vamana Rishi in the Yoga Korunta. This text was imparted to Sri T. Krishnamacharya in the early 1900′s by his Guru Rama Mohan Brahmachari, and was later passed down to Sri K Pattabhi Jois during the duration of his studies with Krishnamacharya, beginning in 1927.

These texts are the foundation of what makes up the Ashtanga sequences today. As Sri K Pattabhi Jois passed away at the age of 93 years old the 18th of may in 2009, today his grandson Sharath is teaching in the Shala in Mysore together with his mother, Pattabhi Jois’ daughter Saraswathi.

There is two different way to teach Ashtanga:
First: Mysore style refers to the traditional way of learning Ashtanga Yoga as taught by Sri K Pattabhi Jois in Mysore, India. In a Mysore class students move through the practice at their own pace and level with the individual support of the teacher. He spends one-on-one time with each student, giving adjustments and moving each one forward at a pace suitable to his or her strengths and abilities. Practice in silence, linking the movement with breathing, helps one develop a subtle inner listening.
Second: during a led class the teacher is guiding the movement and the breath giving a chance to the student to learn the right vinyasa, the way to link the postures together trough the series. As a classic yoga class the students are moving all together at the same pace.

No prior experience is necessary, nor registration, only a great motivation is needed, come directly! We suggest you to take a look to the Primary Series led by Sri K Pattabhi Jois, so you know what to expect!. You can find the schedule of the classes here. Thank you to visit our page to begin before coming for the first time. Hope to see you soon on the mat!

Here is the full Primary Series led by  Sri K Pattabhi Jois himself :

Here is a document illustrated by us on the detailed practice of the full primary series, click on it you will find it in the shop: 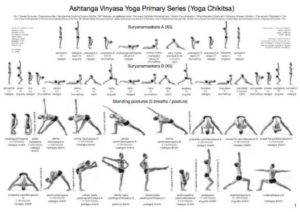 The term Yoga derives from the Sanskrit words Astau meaning eight and Anga meaning limb. Ashtanga Yoga refers to the eight limbs as taught by the great sage Patanjali who was the first to systematize an approach to classical Yoga in his Yoga Sutra. These limbs are steps through which the practitioner can progress to reach a state of Yoga or self-realization. The beauty of the eight limbs is that they teach us to integrate all aspects of Yoga. They are all interrelated and can be practised simultaneously, but they also map out a logical progression in which each limb prepares the practitioner for the next.
The first two limbs are the YAMA, the 5 ethics: Ahimsa (non-violence), Satya (truthfulness), Asteya (non-stealing), Bramhacharaya (control of vital energy), Aparigraha (freedom from possession beyond one’s needs) and NIYAMA, the 5 disciplines: Saucha (purity of body and mind), Santosha (contentment), Tapas (austerity, self discipline, conscious effort to achieve one’s aim), Svadhyaya (self- study), Isvarapranidhana (surrender to the Divine). The third limb is ASANA, which is the physical practice many westerners associate with Yoga. The Asanas are designed to purify, balance and stabilize the body and the energy channels to allow the breath and Prana (life-force) to move freely. PRANAYAMA the fourth limb, takes this transformational process a step further as these yogic breathing techniques teach us to harness, direct and channel the pranic energy. The next step is PRATYAHARA, the fith limb or ‘the bridge’ between external and internal Yoga. Pratyahara is when the senses begin to turn inwards rather than constantly search for external gratification and stimuli. The three last inner limbs are also called Raja Yoga (royal yoga): DHARANA –concentration, DHYANA –meditation and SAMADHI –a state of bliss or self-realization, they are allowed to naturally unfold as we become established in the first five limbs.

Here is the way Sri K Pattabhi Jois himself explained the practice of Ashtanga Vinyasa Yoga:

Vinyasa means breathing and movement system. For each movement, there is one breath. The purpose of vinyasa is for internal cleansing. Breathing and moving together while performing asanas makes the blood hot, or as Pattabhi Jois says, boils the blood. Sweat is an important by product of vinyasa, because it is only through sweat that disease leaves the body and purification occurs. After the body is purified, it is possible to purify the nervous system, and then the sense organs. These first steps are very difficult and require many years of practice.

Tristhana: This means the three places of attention or action: These three are very important for yoga practice, and cover three levels of purification: the body, nervous system and mind. They are always performed in conjunction with each other. Asanas purify, strengthen and give flexibility to the body. Ujjai breath should be steady and even, the length of the inhale should be the same length as the exhale. Breathing in this manner purifies the nervous system. Dristhi is the place where you look while in the asana. There are nine dristhis: the nose, between the eyebrows, navel, thumb, hands, feet, up, right side and left side. Dristhi purifies and stabilizes the functioning of the mind.

The six poisons: A vital aspect of internal purification that Pattabhi Jois teaches relates to the six poisons that surround the spiritual heart. In the yoga shastra it is said that God dwells in our heart in the form of light, but this light is covered by six poisons: kama, krodha, moha, lobha, matsarya, and mada. These are desire, anger, delusion, greed, envy and sloth. When yoga practice is sustained with great diligence and dedication over a long period of time, the heat generated from it burns away these poisons, and the light of our inner nature shines forth.

This forms the practical and philosophic basis of Ashtanga Vinyasa Yoga as taught by Sri K. Pattabhi Jois.

You can also visualise the Intermediate Series led by Sri K Pattabhi Jois himself: